After waking up wet from the leaking thatched roof beach hut I slept under, I hopped on the motorcycle and was off to see the ruins at Oaxaca, Mexico. Little did I know that I was about to drive one of the most challenging roads yet. The highway from Puerto Escondido to Oaxaca goes almost entirely through the mountains and every turn is a sharp one. The road has a little bit of everything: horrid pavement with pot holes the size of a small car, debris from the 90 degree rock cliffs, sections of mangled guardrail from the last unlucky tourist, giant semi trucks passing around blind corners, and the mandatory number of small dogs and large cows which is about 1 per mile. 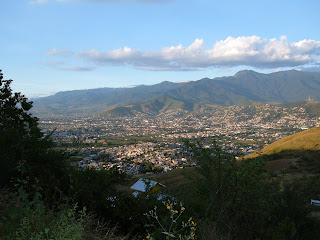 Spirited driving allowed me to really make good time through these mountains (my guardian angel must have really been hanging on to the back of the bike with all her might). I arrived in Oaxaca a couple of hours before nightfall, but a combination of a crappy gps map, me not knowing Spanish, and pis-poor Mexican road signs led to it taking two hours to find Monte Alban. 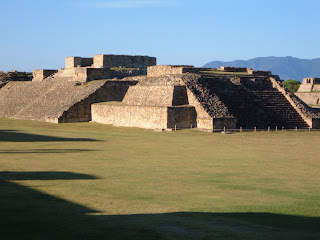 By the time I arrived it was quickly becoming dark and the park had closed. This did not deter me from hiding my bike in some bushes down a dirt road, finding a way around the gate, and walking 5 km in motorcycle boots. When I arrived at the ruins it was hard to see but I could make out the outlines of enormous structures. I climbed every structure that I could and walked into every entrance. It was kind of creepy inside the pitch black 2000 year old pyramids with only my camera lcd screen as a light. After a couple of hours of exploring I headed back down the mountain and camped next to wear my bike was hidden. The  next day I re-explored but this time the pictures came out good. 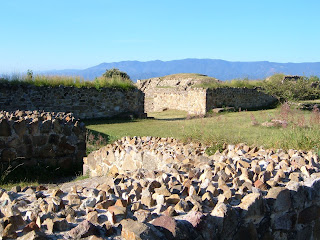