Making my way from Puerto Barrios, Guatemala to Teciugalpa, Honduras without a kickstand was very tricky. I was forced to balance the bike while getting off of it and than lift the fully weighted down bike onto its centerstand. After finally making it to Tegus (Teciugalpa) a very nice doctor at a gas station spoke to me in English and let me use his cell phone to call a guy named Allan from couchsurfing.com who agreed to host me. I was surprised to be greeted by Allan's australian accemt on the phone. He agreed to come meet me at the gas station where I was. 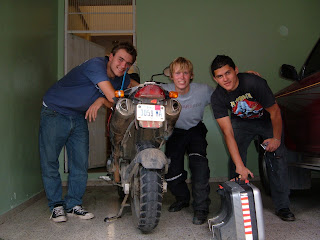 I met Allan and a couple of his friends and followed them back to Allan's parents house. Allan had a very nice house and both his parents and him were very welcoming. Allan took me out the first night to a bar where I tried some new beers and met some American girls. The next night we went to his girlfriends birthday party where I was surprised to find a majority of English speakers. 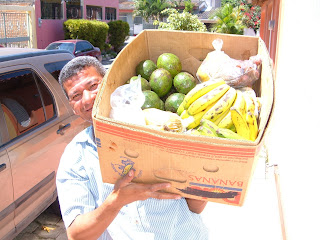 On the third day we went to have my kickstand fixed at the local hack job mechanics shop. He fixed the stand by cutting a V shape out of the bar and than bending it so it touched the ground. The problem was that he forgot to weld where he made the bend and when we got back the stand bent back to its old position. I returned an hour later with Allan's German Exchange friend Lucast who explained the problem. The mechanic than took his battery charger, which he used for TIG welding! and used a piece of glass about 1 inch wide and 3 inches long for eye protection!

For the last night we hung out at Allan's house and had a quiet night. In the morning Allan's dad, Lucast and Allan escorted me (I was riding my motorcycle) to the turnoff for El Amatillo, El Salvador.
Posted by Geoff Tayner at 3:54 PM