After leaving the rough port city of Turbo (located in the northwest) I set out for Cartegena. My friend Tomas (was a nice 21 year old English teacher in Turbo who helped me get my motorcycle papers at the customs building) rode on the bike with me. He needed a ride to Barranquilla to visit his mother and I needed him to help me get my papers in Cartegena. 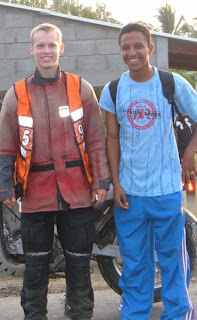 Little did I know that the road from Turbo to the next major city was nearly all dirt and gravel with pot holes the size of a small car! With 2 people the bike sits a lot lower to the ground and every pot hole or speed bump becomes hazard to the bottom of your engine. We made are way painfully slow for the first 100 miles.

Before we got to the next mjor city I noticed that my bike was leaking oil. I pulled over to an internet cafe and researched what the problem could be for a few hours. The trip that was supposed to take 1 day to Cartegena ended up taking 3 because my bike`s problem became progressively worse. At first the bike was leaking oil, than the oil mysteriously stopped leaking and the check engine light came on. I kept topping the bike off with engine oil (even know there was no evident leak the oil level kept going down) to get rid of the check engine light. Finally, the check engine light refused to turn off and Tomas and I were forced to stop in the small town of San Onofre which is only 60 kms before Cartegena! (grrr)

I had managed to spend all of my money and Toma´s too on oil for my bike that day. I assumed that there would be an atm along the way, but there was nothing but tiny towns between Monteria and San Onofre (it is a 100 miles between them). Since darkness was approaching Tomas and I were forced to seek help at houses nearby. After knocking on a few doors we found a very nice family who let us sleep on hammocks in their enclosed backyard. They also gave us food and a safe place to store my bike for the night.
Posted by Geoff Tayner at 3:57 PM