While researching my motorcycle's problem on the internet a Colombian motorcycle mechanic named Tiberio advised me not to have my motorcycle fixed in Cartegena because it would be the end of my bike if I did. He offered to come pick my bike up and take it back to his shop in Medellin (450 miles away) so he could fix it. After a little thinking the situation over I decided that it was better to pay to have my bike shipped all the way to Medellin rather than risk a poorly qualifed mechanic in Cartegena trying to fix the bike.

Tiberio kindly came and picked the bike and I up with his truck. Tiberio was about 60 and had worked in the U.S. as a BMW motorcycle mechanic for a few years. His English was really good and on the long ride to Medellin we talked about motorcycle traveling and about the tyrant Pablo Escobar! 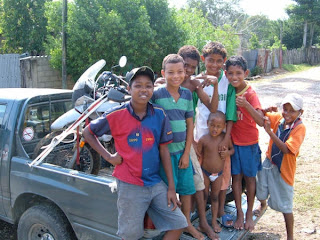 (Tiberio's truck and the local kids in San Onofre)

Tiberio met Pablo by accident when he stopped to fill up at a gas station 20 years ago.
Apparently, Pablo was short and stocky unlike the Hollywood movies. Tiberio told me that after his death it was discovered that he used a hollowed out milk truck to travel around Colombia secretly. 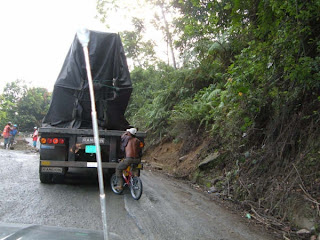 
Tiberio and I arrived at Moto Angel (the motorcycle shop) and met the friendly staff at the shop. There was Hectar the manager, Carlos the mechanic, Camillo the assistant mechanic, and Jimmy the other assistant mechanic. Carlos gave me a nice Colombia bracelet and pin. 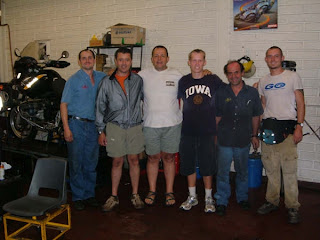 Next, I went to Hostal Medellin, where I stayed for the next week. At the hostal I met a nice Australian  guy named Andrew who was doing the same trip as me on his 1994 Kawasaki KLR. There was also a nice Swiss couple who showed up later at the Hostal (Martin & Katia). They started their trip in
Argentina and were on there way up to Panama. Martin (a mechanichal engineer) was rebuilding his 1988 Honda Africa Twin's engine himself at Moto Angel. His girlfriend Katia was riding a 1999 Suzuki DR 650.

After a week my bike was fixed and I took off for Bogota, but was unpleasantly surprised to see that the same problem was still happening. I returned to Moto Angel and decided that with the extra time needed to fix my bike, I should look for a solution to my luggage problem on my bike. My sole remaining BMW plast side case had fallen off the bike while riding a couple times. The plastic around the metal reinforced mounting tabs had started to rip off.

After much debating I decided to buy some used aluminum panniers from Moto Angel and change the mounts so they would fit my racks. This was much more work than I thought it would be, but fortuntely my Swiss friend Martin (the mechanical engineer) helped me out by giving me directions on what to do and lending me tools. Martin made his own panniers and they were quite impressive because they were elliptical in shape and one of the lids had a built in folding stand so that it could be used as a table.

For my last few days in Medellin I couchsurfed with a very nice Colombian family in the suburb
Acevedo. My host Giovanny was a great guy and really made me feel at home with the rest of his family. I had a chance to practice my Spanish because no one else in his family spoke English. Finally, after 2 weeks in Medellin, I left early in the morning to Bogota and my bike ran like a charm.

Christmas dinner at the Hostal

I thought that this Christmas would be pretty lonely but with the friends I made at the hostel it was very nice.
Posted by Geoff Tayner at 3:58 PM