New Years in Bogota, Colombia! (12/30/08-01/02/08)
After briefly exploring Bogota on my first day I called the Juan the couchsurfer that I had arranged to stay with. Juan (26) and his brother Santiago (24) came to pick me up in Santiago´s 1976 Renault 12. I followed them back on my motorcycle and on the way we saw a couple riding a motorcycle with a dog ballancing with its front paws on the handlebars and its rear paws on the tank. It was so amazing because they would turn and the dog new how to reposition himself so he did not fall of the motorcycle! 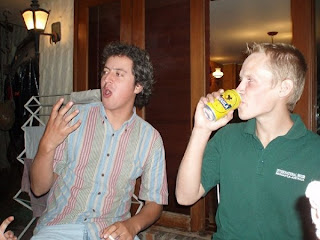 Juan and Santiago lived in a nice apartment building outside of downtown Bogota. They took me out the first night to a party with their friends. Surprisingly, all of Juan´s friends knew English. I asked if there was Facebook in Colombia (I thought it was a valid question because when I was in Australia Facebook had not came there yet) and was unprepared for the onslaught of jokes that awaited me (ie. We just got TV´s last year, were still waiting on computers. After many Aguila´s (Colombian beers) and Mochala´s (mixed drinks) I was dancing Salsa.

Santiago and his dad took me on a 4 hour walking tour of the city the next day. It was great because I really like history and Santiago´s dad new all about the history of the city. April 9th of 1948 is a very famous day for Bogotans because the liberal candidate for president Jorge Elicier Gaitan was murdered in the heart of Bogota and a huge riot ensued that resulted in most of the historical houses in Bogota being burned to the ground. 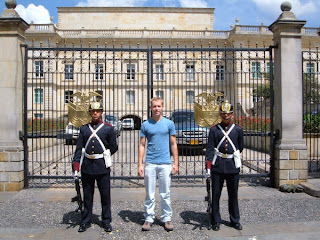 For new years eve we had juicy steaks with bacon wrapped around them and mashed potatoes. I think this has been the best meal that I have had on my trip. At 12:00 on new years it is a tradition in Colombia that you eat 12 grapes and make a wish after each grape. Santiago and I had planned to go out for the night, but he got a call from his uncle asking if I wanted to leave for Cali tomorrow with his son and law who rides a motorcycle. It was a great offer and I agreed so there was no going out unfortunately.
I can not say enough about this family. They really made me feel like I was at home while I stayed with them. There are so many great people who helped me out in Colombia. It is definitely a country I want to return to someday. (Due to my poor picture taking skills I forgot to get pictures of Juan and Santiago). 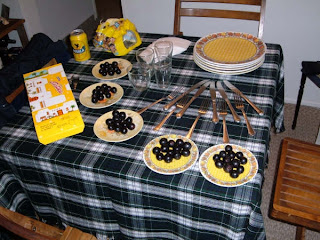