After 6 months of not working out I decided that it was time to go back to the gym. I thought that 3 months of strenuous motorcycle riding would have increased my natural strength. I approached the bench press optimistically and loaded 45´s and than 10´s on each side. I lifted the bar up and it came straight down and did not want to go back up. For the next 5 minutes I kept decreasing the weight until I got to 30 on each side. Wow, was I depressed!

A few days later at the gym I met another motorcyclist who had his KTM 950 Adventure parked out front. His name is Enrique and he is a pretty interesting guy. He was a national champion in motorcross racing but now he has swithced to racing rally cars. Enrique told me that he knows a welder who can make me the crashbars I want for my motorcycle for a good price. He told me to meet him at the auto body shop he owns the next day. 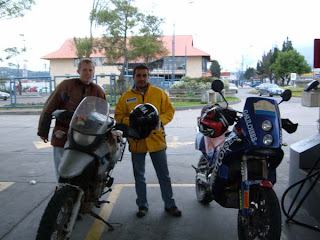 Enrique´s autobody shop is dangerously close to the airport. The runway is only 40 ft from the outer wall of his fence. I think I can almost make out the faces of passengers as they land! Enrique´s office is decorated with dozens motocross trophies and pictures of his jumps. One picture was particularly interesting. This picture shows him jumping 20 cars in an Evil Kinevil style jump. 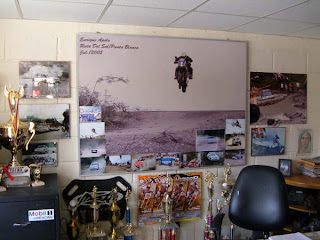