Many locals and tourist guides in Cusco said it was not possible to ride a motorcycle up to Machu Pichu and that instead I would have to take a train or a  bus. Fortunately, I met an Australian motorcyclist named Tim who knew otherwise. Tim told me that you could follow the route the busses take up to Machu Pichu and than walk 2 hours a long the train tracks to get to the ruins. Not wanting to pay a $170 train ticket or a similar bus ticket I followed the advice that Tim gave me and set off to Machu Pichu. 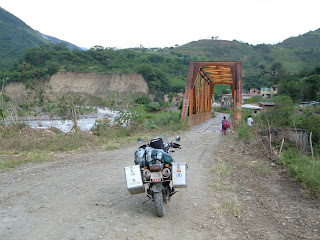 The ride up to Machu Pichu was treacherous. I took the mountain route that goes through Chinchero and Ollyatamba because I thought it would be faster. As soon as I got up into the mountains it started to rain. Mistakenly, I thought that the rain would be fine because I had the thermals and the rainsuit that my parents just sent me. After putting on 5 layers of clothes, 2 pairs of socks, a extra pair of gloves, a neck warmer, and my rainsuit I was still freezing. Part of the problem was my non waterproof leather boots which were soaking up water likea sponge. 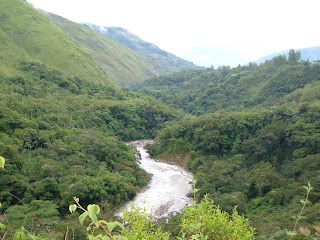 Once I reached the dirt road at Santa Marta the fun really began. The rain makes jungle roads very hard to drive on. Jungle mud forms for long stretches on the road and without knobbies (offroad tires) it is very hard to keep from falling into a nice big mud puddle. It was funny how rediculously easy this road was to drive when dry on the way back. 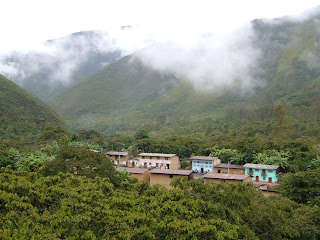 After a few challenging hours of dirt roads I made it to Hydroelectrica. This town has no roads and was basically just a big hydro electricity plant with a few houses close buy. After unsuccessfully trying to ride the railroad tracks for 20 minutes to get into town (there is no road) a local man who was an engineer for the dam helped me push my bike out of multiple obstacles (railroad tracks, rocks, garbage, etc.) and than took me to the police station. 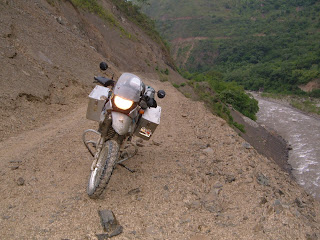 The police kindly let me store my bike on a concrete pad behind the police station. Normally I would be worried leaving my bike outside, but here I was perfectly okay with it. I thought to myself ¨If a thief can ride this out of here he can have it.¨ The police let me stay in a spare bedroom that they had at the station. It was pretty nice to stay at a Peruvian Police Station. They had  hot water, comfy beds, alpaca blankets, and good lighting. It was better than a lot of the hostals I have stayed at.
The next day I set out for Machu Pichu following the railroad tracks. It was quite the walk to Agua Calientes (town closest to MP). 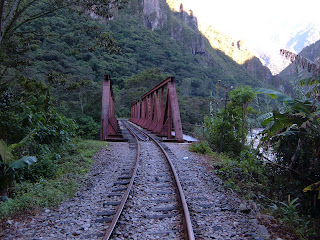