I am sure that many of you have seen videos or picture slideshows of ¨The Highway of Death: The world´s most dangerous road¨ in Bolivia. These videos make the road look like you will die just from standing on it. The road is actually pretty good in most places and is 2 lanes for the majority of the way. Most of the road does have crazy 1000+ ft. drop offs beyond the shoulder. 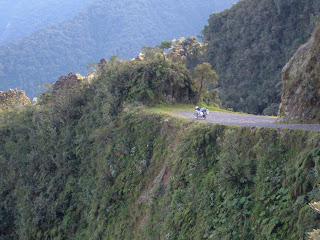 The Yungus Road was built by Paraguayan prisoners in the Chaco war of the 1930s. The Chaco war was about land called the Chaco between Bolivia and Paraguay which was thought to be rich in oil deposits at the time but turned out not to have any. One international oil company sponsored the Bolivians and another sponsored the Parguayans. More than 30,000 men died in the war for nothing and the border line through the Chaco remained the same. 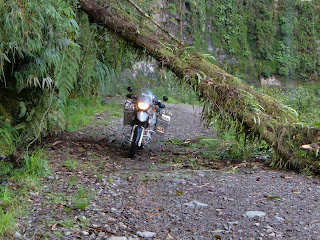 Because I got a late start from La Paz and the road took a while to find (exit is off to the right after the tiny town Udavi) I decided to camp the first night on the road. I found a small town and asked a family if I could camp in their backyard. A group of neighborhood kids watched with wide eyes as I tried to fix my leaking radiator with epoxy in the dark. 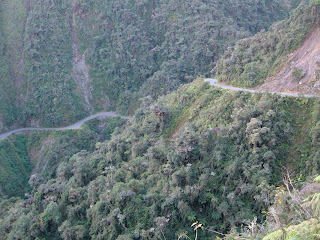 Getting an early start the next morning I setoff and cautiously drove the highway of death. It was pretty nerve wrecking driving through the narrow one lane stretches on my motorcycle. (I can not imagine what it must be like in a bus or a big truck). Everything was going fine until about an hour in when I drove up a tricky Caterpillar trail and than all of a sudden there was a 10 ft drop off in the road. There were no signs to show that the road was closed or that they were doing construction. Being stuck at the top of a muddy hill I wondered how I was going to get out of this situation. Fortunately, constuction workers showed up 20 minutes later and told me that the road had been closed since yesterday (no wonder I could not find the main entrance) and that they would have the road driveable in 2 hours. After removing all the weight from the motorcycle (panniers, tank bag, ruck sack, etc.) the construction workers helped me roll my motorcycle down the steep hill. 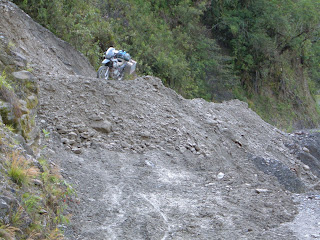 As typical of Latin American time estimates it ended up taking 4 hours to clear the road, but that was okay because I passed the time eating Tuna and Crackers while reading my Lonely Planet. 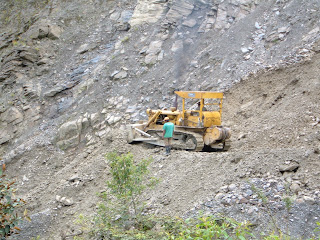 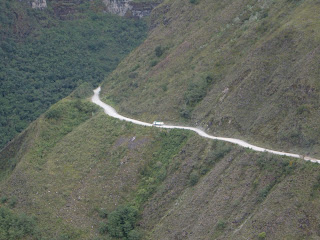