After leaving Valdivia, I headed South for Puerto Montt where my plan was to head Southeast along the mainland where I heard that there was a dirt road connecting North and South Chile together. Two days of driving and a ferry fee later it turned out that there was no road as the dirt road I was on abruptly ended and hour past Hornopiren. 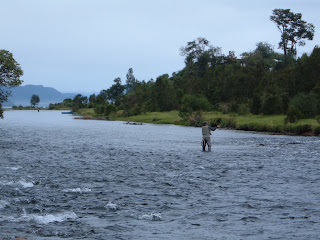 (Here a man flyfishes in a beautiful river. I took this on to make my flyfishing guru friend Philip jealous.)

Frustrated, I returned to Puerto Montt and tried to make up my mind about whether to head an hour North to Osorno or to head South to Paragua and cross over to the Island of Chiloe. I knew the ferry fee was $70 from Chiloe to the mainland and that it would probably be a couple days wait to catch it.

In Puerto Montt I decided to look for some coolant for my leaky radiator. As I was walking into a small hardware store a German Shepard jumped out of the back of a truck and bit me in the back of the leg. I yelled out in pain not knowing what had happened. Once I figured out it was the dog that bit me the first thing I thought was ¨Rabies!¨ Luckily I had 3 layers of pants on because it was so cold and the bite only left a few bad scratches. For the rest of the day I had a bad limp because the dog bit bit me right on the thigh. 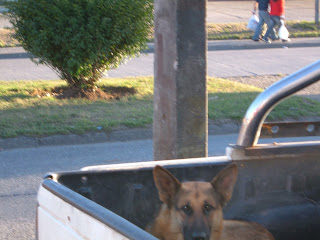 Unfortunately, I chose to head South to the Island of Chiloe. I camped outside the city of Castro in the back of a large Morton building that was next to a gas station. Inspecting the bike with a flashlight I looked at my badly cracked frame from tough dirt riding the previous day. My pannier was being held on to the bike with fishing rope that a truck driver gave me on the ferry. Luckily the morton building turned out to be a welding repair shop for hydraulic cranes on fishing boats. The owner was a nice guy and welded my frame nicely in no time. 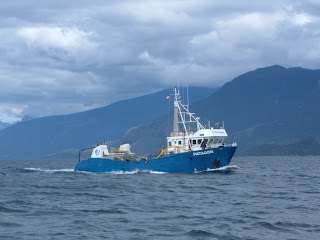 I drove South to Quellon where I learned that I had just missed the ferry and would have to wait 4 days for the next one. Four days! I could not understand why the ferry only left 2 times a week when there was no road over the mainland. (BTW: The ferry from Quellon to Chaiten leaves Wednesday and Sundays at 2 p.m. but is frequently late) Now I understand that all of the big trucks and the locals take the ferry directly from Puerto Montt to Chaiten (I think it is about the same price and it leaves frequently) 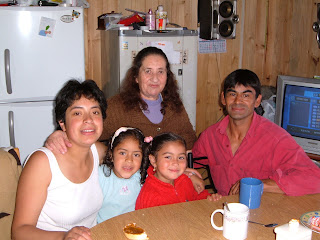 I camped for 4 days in Quellon and luckily there was a nice family who took me in because it rains all the time in Quellon. Camping in the rain is never fun. The family was actually 2 families that were living in the same house because 1 family was waiting on the windows to be installed on there newly constructed house next door. They let me sleep in the house without windows and I have never been more happy to have a roof over my head.

They fed me meals and I gave me mate to drink. The meals were very good but I had to refuse on one of them because I think it was intestines of a cow in a bowl! I told the family I was vegetarian but than I remembered that I had eated chicken with them for lunch the previous day. Luckily they were not offended. Finally it was time for my ferry to leave and I thanked the family and headed down to the docks with my motorcycle. 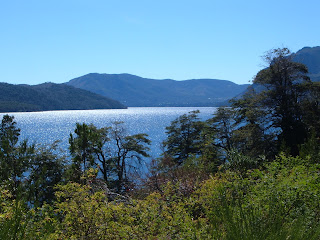 The ferry was late and would not be leaving until the next night. Being fed up with Chile I decided that it would be better to drive back up to Osorno and cross into Argentina. The scenery is very pretty a long this route and I would recommend not crossing at the Island of Chiloe because the scenery is better near Bariloche and you will not be waiting for ever in an expensive country where 1 liter of coolant costs $7.50 U.S. From Bariloche you can drive South to Tecka on paved roads and than head West from Tecka to Parque Nacional Los Alerces and drive South on the Caterra Austral (The Caterra Austral is mostly unpaved and not too easy in some parts with big lose gravel.
Posted by Geoff Tayner at 7:27 PM