Unfortunately the chain to my motorcycle broke again at the connecting link. It left me stranded 130 kilometers South of Perito Moreno on Ruta 40. This is the third time in a month that I have had a connecting link break. The last two times it made sense because my chain had close to 20,000 miles but this chain and sprockets only has 3,000 miles.

When I figured out that there was nothing I could do to fix the bike I started to push the bike along Ruta 40 to the next town which was 30 kms away. Wow was it depressing as I pushed my 400 lbs bike down the road at about 1 mph. About 5 vehicles drove by in 3 hours. Luckily the 5th one was a truck and it stopped to give me a lift to Perito Moreno. 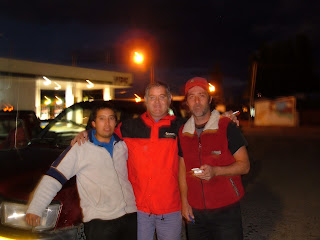 (L-R Juan, Alfraedo, their friend)
The two guys in the truck were cooks who were on there way back from working for a few months at one of the mines in Patagonia. There names were Alfraedo and Juan. Luckily Juan knew about motorcycles so loading the bike on to the truck and fastening it went rather smoothly. When we made it to Perito Moreno Alfraedo and Juan dropped me off at a Gomeria behind the YPF gas station. I gave them some gas money and thanked them for helping me out.


The mechanic at the Gomeria (They call mechanic shops Gomerias here! It gave me a pretty big laugh the first time I saw it in Argentina. gomer!) told me that the only way he could fix the chain without a connecting link was to remove the connecting link and weld in one of the spare links that came with my chain. After checking on horizonsunlimited.com it seems that this idea will work but only for 2-3 days of riding.

Looking for an excuse to see the Caterra Austral I decided to hitchhike to Coyhaique and look for a conncecting link there. It was very strange to hitchhike for my first time. On my second vehicle I got lucky and the truck driver pulled over. After opening the door to the 18 wheeler my first impression was ¨Oh no, this guy looks like a serial killer,¨ but luckily his looks were deceiving and he turned out to be a nice guy. He told me that he had a family of 8 kids (grown up) in Commodoro Rivadavia. The suspension on his truck was completely shot. It was easy to tell as the cab jumped all over the place that this guy was mainly driving the truck on gravel roads. 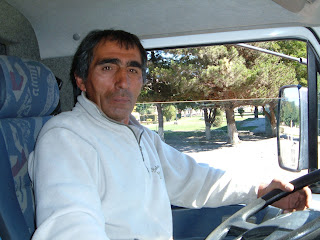 Getting to Coyhaique took a few more rides. The people I talked to were very interesting and now I understand why the hitchhiker´s have much better Spanish that the motorcyclists. Most of the time hitchhiking was like a huge Spanish lesson. The last guy I hitchhiked with was a biologist at a Pumalin National Park and it was hilarious because he was 100% hippy. He had hippy necklaces, hippy food, and hippy music. He was surprised that I did not recognize his Pink Floyd music. I can not say that I am a huge fan of PF now but it was kind of a cool experience to listen to their music as we drove through spectacular mountain and lake landscapes. 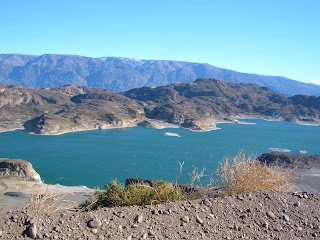