While trying to work on my bike at the parking garage a motorcyclist named Lucas came up and introduced himself. He was the secretary of the BMW Motorcylce Club Buenos Aires. After telling him about my trip I told him that I had spent the whole day in vain searching for the BMW dealer in Buenos Aires (Costanera y Salguero: It is North of the Domestic airport several blocks past the polo stadium). Lucas offered to tow me to the club´s garage where the club´s president Horatio could help me change the cable.
The next day Lucas used his big Moto Guzzi and my trusty rope (I have used the rope I bought in Nicaraugua for so many things (to secure the bike on ships/trucks, to fasten my extra fuel, for the towing of a SUV in Bolivia, and etc.) to tow my bike 30 blocks in downtown Buenos Aires.

Towing motorcycles was very dangerous. I have towed trucks before so I thought it would not be that difficult. With motorcycles the danger comes when turning or slowing down (lots of this when in a city). The tow rope rubs against the tire when you try to turn and makes the turn difficult. The real danger was the sudden stops though because I almost ran over the tow ropes several times which would have made the motorcycle tip over and be dragged on the ground. 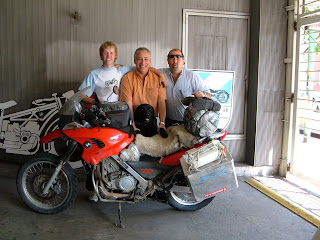 We finally made it to the club´s garage where I met Horatio (the club´s president). He was a very nice man and had a few projects in his city parking garage including a cool old Mercury. In 5 minutes Horatio changed out my clutch cable (I think I could do it on my own now, but not in 5 minutes, lol). It was great to talk about motorcycles with Horatio and Lucas for 30 minutes. The garage parking attendant mentioned how nice the comraderie is between motorcyclists. It is what makes motorcycling so great. Most times a Harley rider can have a friendly conversation with a Ducati rider and they can respect eachothers different tastes. Motorcycle ownership ownership is everything that car ownership is not.