The Blues were hitting me hard driving to Uruguay. Since Bolivia I had become progressively more home sick. Riding ten hours a day so frequently can quickly become monotonous. 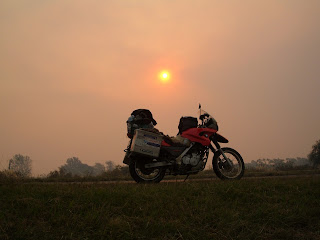 The drive to Uruguay was relatively uneventful until I got within 50 miles of the border and started to enter thicker and thicker smoke from forest fires. The previous day in Buenos Aires I had seen a lot of smoke on the streets and I heard it was from forest fires, but had no idea that they were here. Breathing became hard after an hour and I became nervous after not seeing another motorcyclist for 30 minutes. Fortunately the smoke improved and so did my breathing as I neared the border crossing. 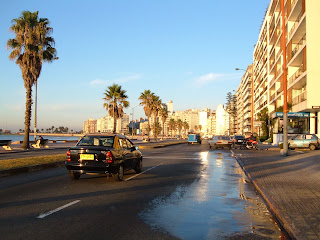 Crossing the Uruguayan border I did not expect to have any problems. Just before reaching the border a police officer signalled me to pull over and check my papers. As I pulled out my papers from their plastic cover I began to panic when I noticed that the temporary drivers permit was missing. "How the heck do you lose your most important document I asked myself?" The police officer told me that I would need to go to the station with him and pay 100 pesos to get a new one. Not trusting him I told him that I did not have any money because I was about to cross the border and get Uruguay money. He told me that I would need it to cross the border and that if I had 50 pesos he could get it for me. I told him again that I was out of money and that I would stop at the next town and get money. (Looking back at the situation I think the officer was probably just trying to help me out.)

Once I reached the aduana all the problems began. I used my normal story for the few times that I have been in deep trouble with immigration/aduana and told the officials that I was robbed and the theives stole my papers. Having time beforehand to think about my story helped and I decided to use the actual story of when I got robbed in La Rioja. It made sense that the title and registration to my bike were only copies (the original color copies had been taken by the police in Colombia) but it also looked suspicious that I did not have any real documents to prove the bike was mine.
Unluckily, I got the customs guy who was straight out of Nazi Germany or Franco´s Spain. He was one of those people who was determined to make your life harder. For thirty minutes I talked with this officer and he kept telling me that I better call my parents (as if they could help me in this situation). Than he finally said that the best thing for me to do was to drive back to La Rioja and have the police issue me new papers.

Luckily, the night shift of aduana officials showed up (made up of younger guys 20-25) and they new good English and were able to explain some of the concerns that my Nazi customs official I had, ie. why I had Canadian citizenship but the bike was from the U.S. The young officials looked through my passport and were able to find the Rio Gallegos entrance stamp that the other guy could not. They told me that they would call Rio Gallegos to get an email copy of my paper and that in the morning I could leave. After about 12 hours of waiting at the aduana station I was finally on the road again. (It turns out I left my customs paper inside a map at Veronica´s grrr)
Posted by Geoff Tayner at 7:39 PM