My first impression upon seeing Paraguay was "Oh no, it is Guatemala again!" I enjoyed Guatemala a lot but now that I am nearing the end of my trip it is getting hard to visit countries that lack many basic amenities. The outskirts of Ciudad del Este where the ferry from Argentina dropped me off was not too inviting. The wretched cobblestone road and seeing poor tiny shack after poor tiny shack gave me mixed feelings. 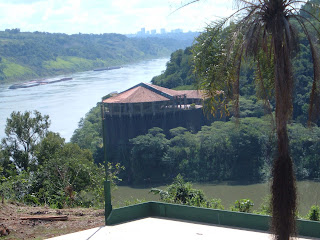 I went to buy some water at the grocery store and was very frustrated to see that my debit card was not in my wallet. I left the damn thing in an atm at Iguazu Falls. Luckily I lost it at this huge tourist destination and not in Ciudad del Este. I immediately went to look for a Casa de Cambio so I could change my US and Uruguay money for Paraguayan money. The search ended up taking 2 hours because I had no idea where the city was and the locals where I was did not seem to know either. After much head scratching I luckily stumbled on the main part of the city.


The surprising thing about Paraguay is that for as poor as it looks the country is relatively expensive. When touring the chocolate and cookie section of the super market I noticed that there are no local brands and that almost every product is imported. The gas prices are comparable to Uruguay which was about 2x as expensive as Argentina. 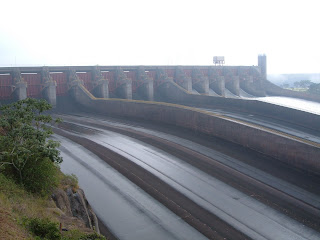 (ITAIPU Hydroelectric Dam, one of the largest in the world.)

The views on the highway from Ciudad del Este to Asuncion were very good. It reminded me a lot of the way Colombia looks. It was nice to see the farms, kids playing soccer, and old men riding horses. It
seems like all the action takes place near the road because there are no other paved roads. The drivers kept getting progressively worse though.
Posted by Geoff Tayner at 7:42 PM