After exploring Cabo San Lucas and La Paz for a day I decide to take the ferry to Topolobampo, Mexico the next day. I pull up to the ferry terminal and there is a group of 10 bikers (mostly bmw´s) ahead of me who are doing a guided tour from LA down to La Paz and back to LA by way of Copper Canyon. I talked to these guys and they were all really friendly. Their guide gave me some granola bars for the road. I wish I had $2-3 thousand laying around so that I could do this trip!

The boat ride over to Topo was calm and we got there shortly after nightfall. Having to drive at night for your first time driving in mainland Mexico is not very fun. Fairly soon after leaving the boat and finding the highway I wanted I saw a bad traffic accident and a man who was laying on the road dead as the medics attended to the survivors. (The next day I saw a dead guy too.) 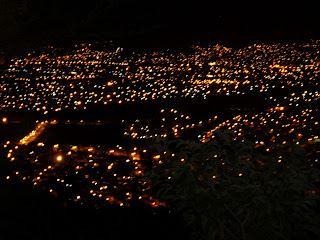