I leave Dale´s and reach the border at Tijuana around mid afternoon. To my surprise this is a drive-thru border, instead of the kind where everyone has to stop and be checked out. I could not believe how easy it was to get into Mexico, but after thinking about it I realize that there is no need for tighter security. The drive-thru border puzzled me and I ended up driving past customs and had to leave my bike parked on the next street and walk back to customs. I have not been more nervous about leaving my bike anywhere in Mexico than I was here on this shanty street in Tijuana.

I quickly went back to customs to have my  passport stamped and  pay  the  tourist fee. The customs man did not speak much English and this was my first experience trying to communicate something in a foreign language. (My Spanish was so terrible. I knew a handful of words and could count to 10 but that was it.) Some how I managed to understand that I must pay at the bank and than come back to have my passport stamped. After completing this process I sprinted back to my bike which luckily had not been carted off in an old pickup truck.

Next, I had to find out where to get my vehicle permit. After bothering a few pedestrians I found one who spoke English and gave me directions on how to get there. After arriving at the vehicle permit place I parked my bike at the front of the building and proceeded to walk around to the entrance. A nice man after a few tries in Spanish was able to explain to me with hand signals that I needed to pull my bike around to park it in the gated parking lot around the other side of the building. I am sure glad that I did this because it took me a good hour at least to get my permit. The building had a whole bunch of offices and after asking at all the wrong ones I managed to stumble upon the right one for getting your vehicle permit. There was a problem though, I did not have my original title for my motorcycle, but I have color copies that look nearly identical to the real thing. I explained that I had a good copy of the title and after 20 minutes of waiting I was directed to a different office where the boss lady reluctantly signed off on me not having a title as long as I promised that my parents would ship it to me. (Now, I just tell the border officials that my copy of the title is an original. It has worked flawlessly except for one bright border official in Guatemala who checked it against the light as I waited nervously thinking that I was about to get busted. He let me go though.)

It took me one hour of driving to get out of Tijuana because I made a wrong turn and later I stalled my bike in busy traffic which was very nerve wrecking, because the F650 decided to be temperamental and would not shift back into neutral. I was forced to get off my bike as dozens of drivers honked and push it up a slight incline and off the road. Tijuana is a very scary place with many very poor people who look like they would rip you off if they came across you in a dark alley. 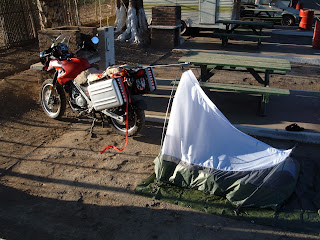 Finally, I make my way out of Tijuana and head to Rosarito which I pass and head down Highway 1. There are very beautiful views of the ocean after you pass Rosarito. It soon became dark and going against the number one rule here (do not drive in the dark) I motored on for a few hours until I found a campground that I gave the owner of a gas station 10 dollars US to camp at.
Posted by Geoff Tayner at 3:47 PM