After a long stay in Medellin, I took off for Bogota. The bike ran great and I know longer had to worry about my luggage falling off because of my new sturdy aluminum boxes. The only complaint about the boxes is they made my bike as wide a Honda Goldwing (gigantic motorcylcle). It was very difficult to avoid splitting lanes. 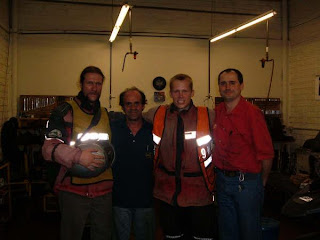 Not riding a motorcycle for 3 weeks made me ansy and I rode like a mad man with the tips of my boots once in a while grinding against the pavement in the hairpin mountain turns. Unfortunately, my picture taking was very limited, because it is hard for me to stop when I get into a spirited driving mode. Three road construction cones fell victim to my aluminum cases because of me forgetting how wide the motorcycle now is.


Midway to Bogota I came up to an enormous traffic jam where everyone was trying to go away from Bogota. This looked like something out of a hollywood movie and almost made me wonder if there was a nuclear strike in Bogota and everyone was evacuating the city. After 2.5 aggravating hours of driving between cars with traffic mostly traveling against me in both lanes I made it free. The rest of the way was smooth sailing Bogota.

Bogota looks completely different than I had expected. In the beginning of Mr. and Mrs. Smith they show a tiny sweltering city with palm trees. In Clear and Present Danger they show Bogota with dirt roads and crumbling buildings. The movies show Bogota as a incredibly violent city where you need a gun to walk accross the street. In reality there are about 10 million people who live in Bogota and you can not see the end of the city because it stretches off in every direction. The city is just as safe as any other major city and you just have to keep your wits about you. Most of the buildings are nice and trendy looking. The roads are paved and ´mostly maintained.´ Do not be fooled by Hollywood like I was; go to Bogota and see this beautiful city for yourself.
Posted by Geoff Tayner at 3:58 PM